December 8th, Thurber's 125th Birthday: The Library of America Features the Classic "The Day the Dam Broke"
Their tribute  begins with the original occasion for the fictionalized autobiographical story that Thurber featured in his book My Life and Hard Times:
A curious article appeared in The Columbus Citizen on March 27, 1913, concerning a bizarre event the day before:
PANIC FOLLOWS FALSE REPORT THAT THE DAM HAD BROKEN

Like a flash, business on High street was paralyzed, the whole city was thrown into a panic, rescue work in the flood district was hurriedly abandoned, the river’s east brink from a mile was cleared of humanity, when, at 4:30 Wednesday afternoon, someone shouted: “The storage dam has burst.”

Never before in the history of Columbus was there such a scene of panic, even consternation. Through alleys, down street, down stairways, out of windows, people hurried, tumbled ran, shouted and fairly fought each other in their almost mad rush. . . .
Continue reading here.
Rock-Legend Janice Joplin...and Her Great Pyrenees She Named "Thurber"
A new biography of the husky, explosive, inimitable  singer Janice Joplin (1943 – 1970), the premier blues singer of the 1960s, was a dog person. And a reader! And he spent her last year with a "moveable snowdrift,"  a Great Pyr, she'd named "Thurber" after her favorite American writer.
James himself was no stranger to the breed. Dearest friend, Rose Algrant, raised these enormous, independent beauties. The Great Pyr was a part of the art world that Rose gathered in her West Cornwall, CT, home...artists that included illustrator Marc Simont who created images for Thurber's The Wonderful O, Many Moons, and The 13 Clocks. 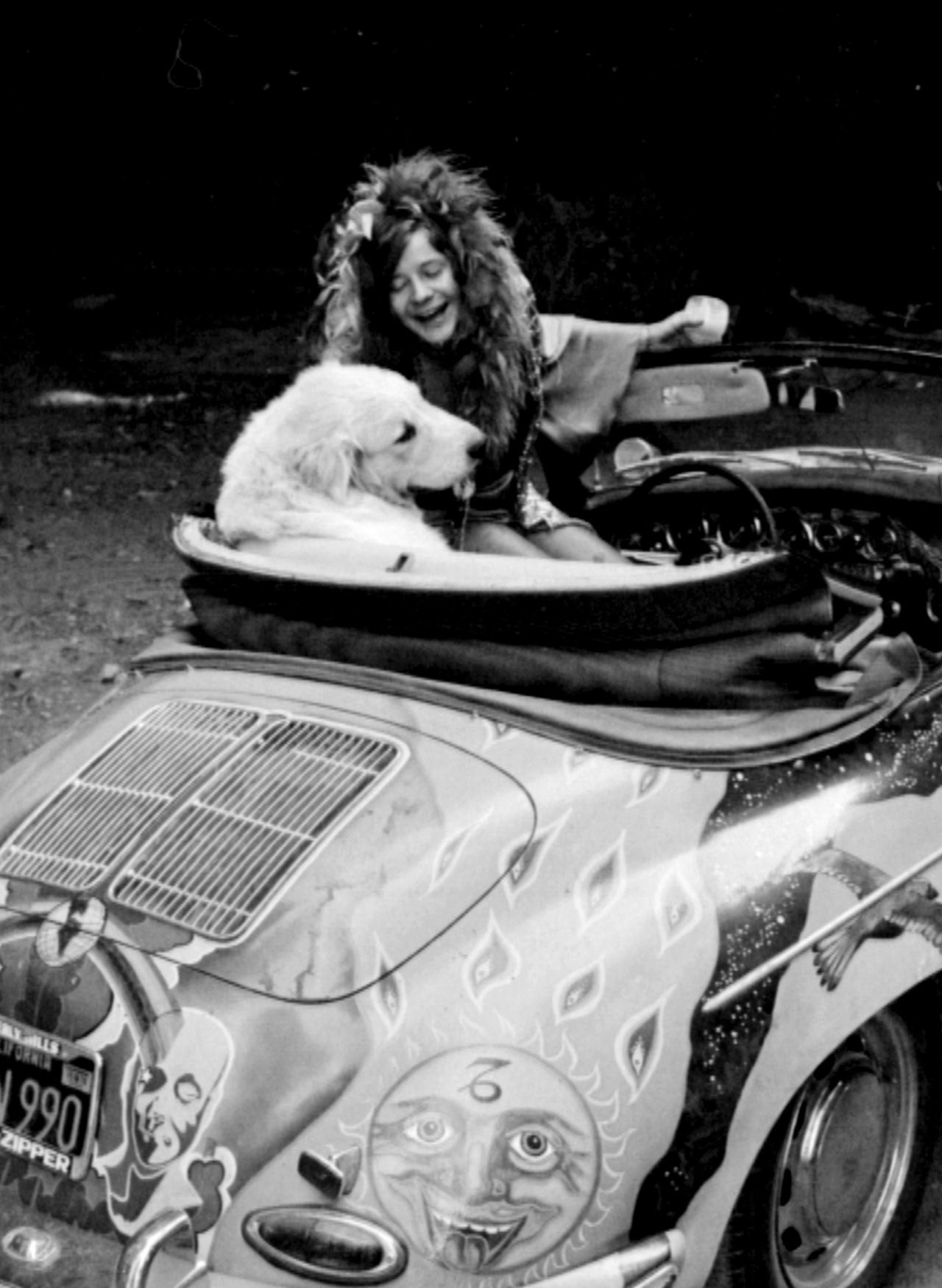 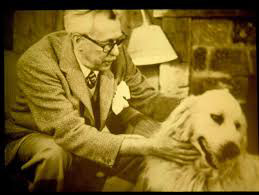 "One-eyed Jim"—The New Criterion's Article on the Exhibit, "A Mile and a Half of Lines"
More of an overview of Thurber and his visual decline; hence the the title, "One-eyed Jim." Here's an excerpt from Nic Rowan's essay:
One of his most famous New Yorker cartoons, “Touché!,” which depicts one man shouting at another as he decapitates him, shows what sets Thurber apart as a humorist. The drawing is essentially two stick figures, both very surprised, the newly headless one probably more so. Thurber drew it at the request of Ross, who thought that other attempts to execute the joke were too gruesome. Only Thurber had the absurdist comic touch necessary to make such a scene funny.
But a decapitation is still a decapitation, even one of a stick figure. Thurber was quick to point out that while his style was childish, his subject matter was not. When people attempted to copy him, he dismissed them: “Mothers thought that I was a little child or that my drawings were done by my granddaughter,” he once said. “So they’d send in their own children’s drawing to the New Yorker, so I was told to write these ladies, and I would write them all the same letter: ‘Your son can certainly draw as well as I can. The only trouble is he hasn’t been through as much.’”
Jonathan Lethem, A Consummate Fan, Reads a Favorite Short Story by Thurber
Here's a link to the New Yorker site where Jonathan Lethem Reads Thurber's "The Wood Duck," in a podcast with fiction editor Deborah Treisman. Originally published in 1936, it's one of the early stories that's less humorous than just handsomely and shrewdly observed by Thurber, a consummate animal person.
"Touché!" And Three More Direct Hits!
This is the original version of one of Thurber's best-known New Yorker cartoons.  As Thurber liked to tell the story, "This drawing ('Touché!') was originally done...by Carl Rose, caption and all. Mr. Rose is a realistic artist, and his gory scene distressed the editors, who hate violence. They asked Rose if he would let me have the idea, since there is obviously no blood to speak of in the people I draw. Rose graciously consented. No one who looks at 'Touché!' believes that the man whose head is in the air is really dead. His opponent will hand it back to him with profuse apologies...."

While that may be the case, Thurber did create these three more sanguine pencil drawings in a personal copy of Max Eastman's book, The Enjoyment of Laughter. They appear in A Mile and a Half of Lines for the first time in print.

A Feature Article on the Exhibit at the Columbus Museum of Art
"The Secret Life of James Thurber," which appears in 614 Magazine.
The Illustrated Feature in 614 Magazine
A Merry-Go-Round
Thurber's classic book of his selected works has remained in print since 1945. What we just discovered was that the original title—the title that appeared on the title page of the advanced reading copy—had the title "The Thurber Merry-Go-Round." Thanks to collector Jay Hoster for sharing this find.

Thurber's classic book of his selected works has remained in print since 1945. What we just discovered was that the original title—the title that appeared on the title page of the advanced reading copy—had the title "The Thurber Merry-Go-Round." Thanks to collector Jay Hoster for sharing this find. 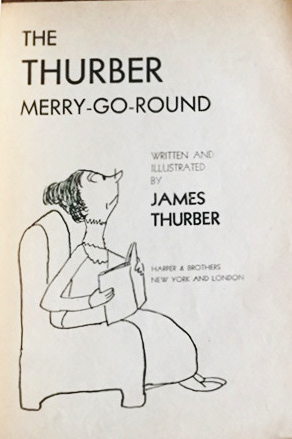 The advanced reading copy of the book with the alternate title 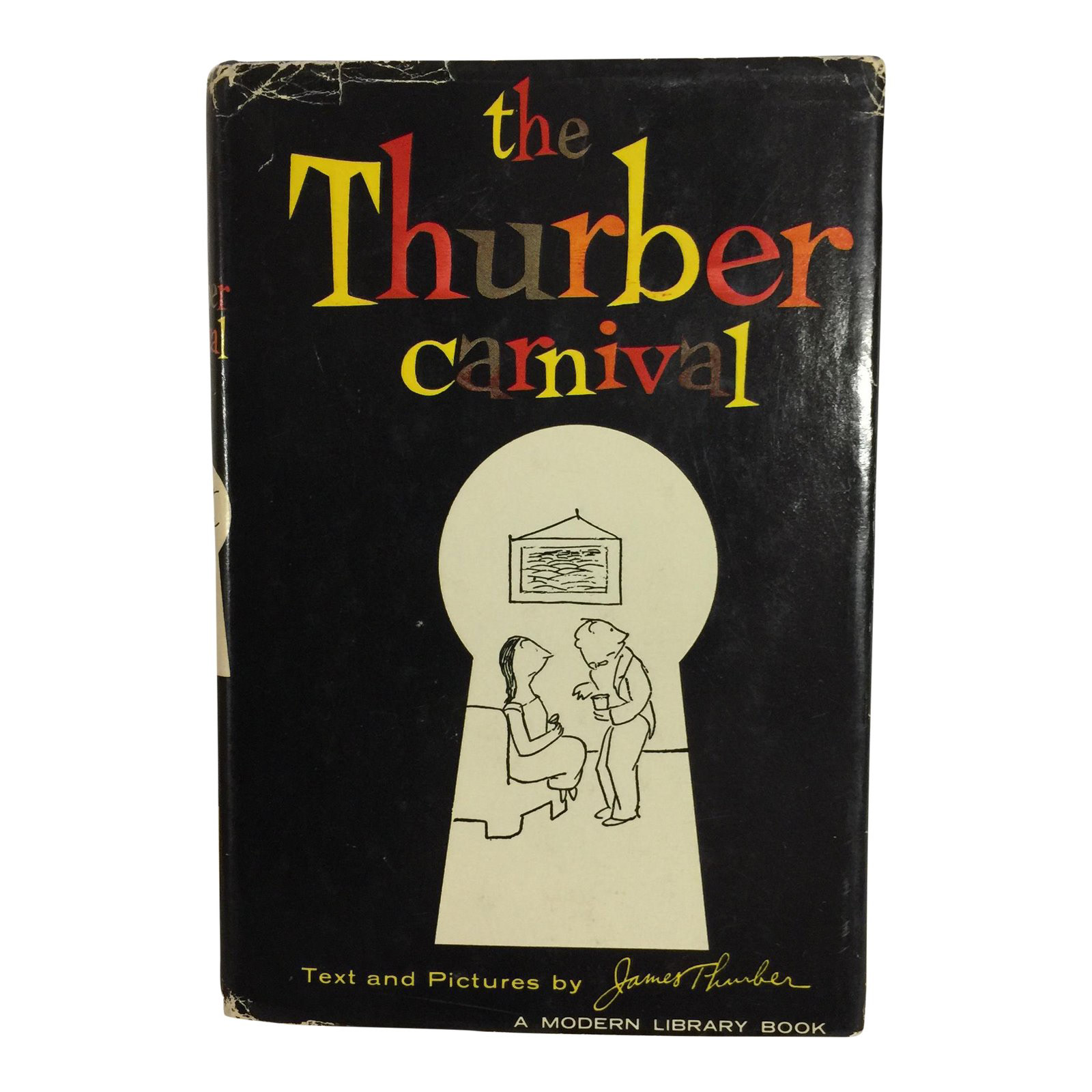 The Modern Library's edition of the classic volume.

1943, Peter DeVries Writes About Thurber in Poetry
https://www.poetryfoundation.org/poetrymagazine/browse?contentId=59844
Thurber's famous flying horse logo for Poetry was created at the request of Devries, but didn't make its debut on the cover until the 1960s. The two men of letters struck up a friendship that endured until the end of Thurber's life. This article in Poetry is certainly one that takes Thurber's work into a most academic light, comparing his "middle-age man on a flying trapeze"  to T. S. Eliot's classic figure, J. Alfred Prufrock. 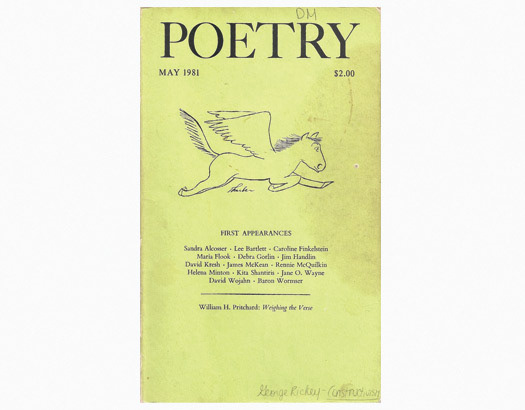 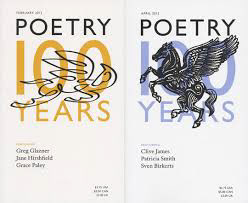 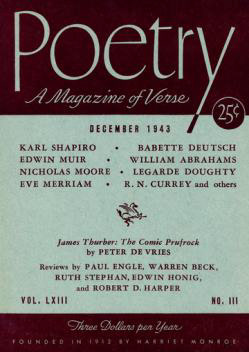 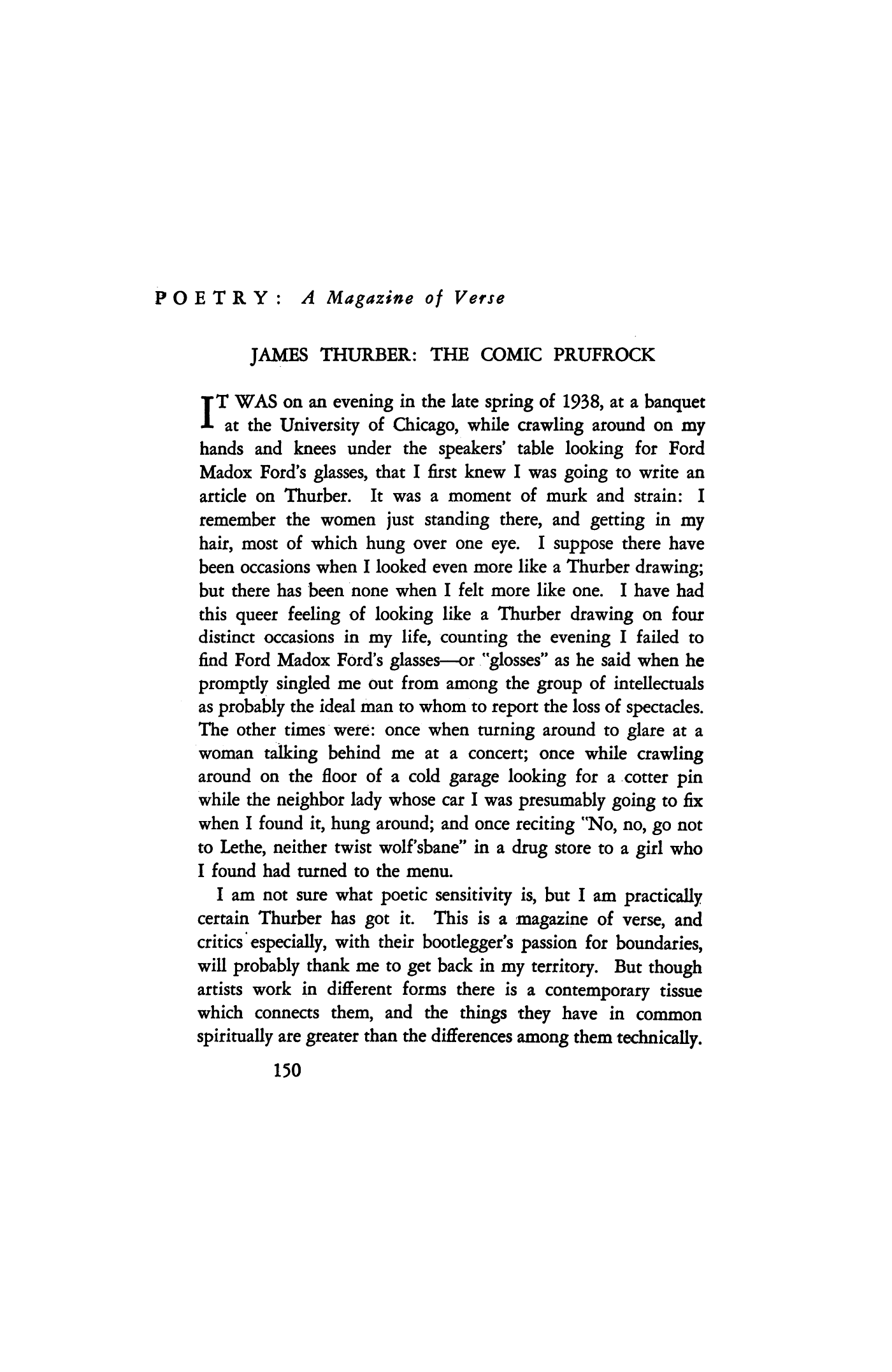